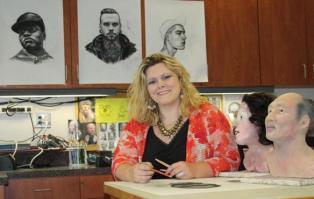 Kelly Lawson is an Atlanta native.  She is the daughter of Harry Lawson, a former Battalion Chief with City of Atlanta Fire Department and Marla Lawson, the highly esteemed first ever forensic artist for the state of Georgia. All throughout her childhood, occasionally she would visit with her mother while she performed her duties as a forensic artist at both the Atlanta Police Department and the GBI. Kelly had no idea at the time, but she was being taught by example, the skills and practices of a forensic artist.

In 2001, Kelly graduated from Northgate High School in Coweta County with a partial scholarship for the study of art at Brigham Young University in Provo, Utah. At BYU, Kelly pursued a bachelor’s degree in the visual arts with an emphasis on drawing, painting, and printmaking. Kelly also studied sculpture in multiple mediums including, wax, clay, metal, and bronze.

From December 2003 until July 2005, Kelly went on the mission field with her church in eastern Ukraine. When she returned, she came home with a renewed desire to find work that allowed  her to help people.  In 2007, Kelly graduated from BYU, and returned to live in metro Atlanta. Kelly worked briefly in the graphic arts with different companies until beginning her employment at the GBI in May of 2012.